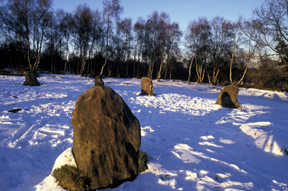 The Peak District national park is located between the industrial towns of Manchester , Sheffield and Derby and covers an area of about 550 sq miles .

Its borders were picked to exclude most large towns from inside its bounds with the main  exception being Bakewell  .  It has two distinctive regions mainly based on geological features and these are the white peak (think limestone country) which lies at the southern end and the dark peak at the northern end ( think peat bogs and gritstone ) .

One thing it is not is a featureless , deserted wilderness . It comprises many dales ,  farmlands and upland  terrains as well as a living and breathing communiy of people  , wildlife and and customs unique to it.  It also contains some of the most beautifull features in the world , is a mecca for walkers , cyclists , hang gliders and infact a whole host of other things too much to mention in this short piece . All in all its just wonderfull.