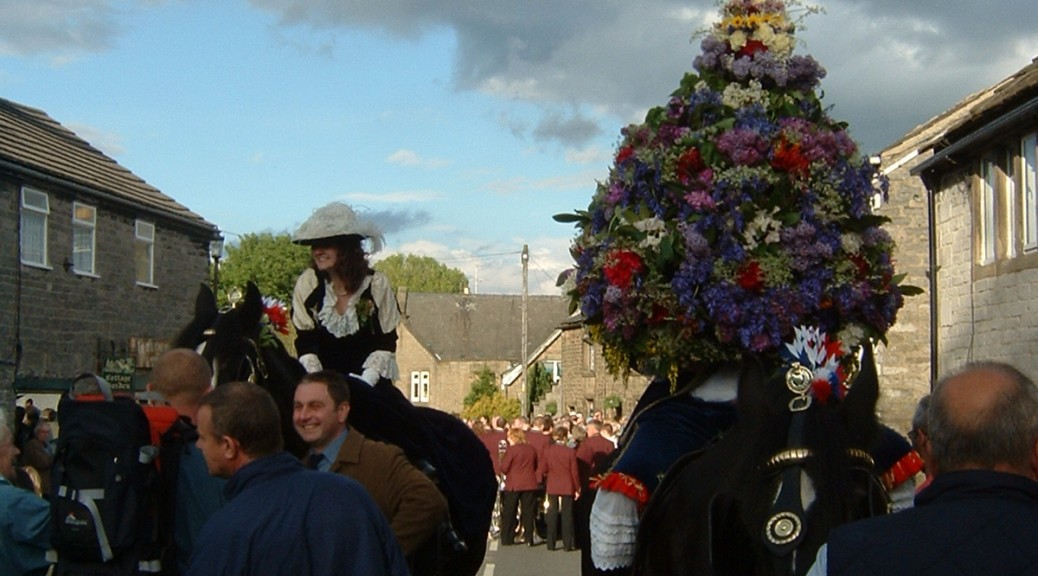 Oak apple day is a fabulous celebration of the restoration of the monarchy in 1660 of king charles the second . Its still celebrated in castleton one of the larger villages in the peak district though I suspect that not a lot of people know why in earnest. Its always held on may 29th by the way and if you go to it make sure you get there early to park up before the roads are closed (usually anytime before 4 is fine)

Certainly its something that everyone should be party to at some point.  It mainly consists of lots of parading , music and dancing with the point of focus being the garland ceremony .As part of the crowd you will also  be offered sprigs of oak to wear .

The garland is a four foot mound of flowers that is worn and I do mean worn by the “King” upon his head whilst riding a horse dressed in clothes from the Stuart period . He’s also accompanied by the queen or Lady similarly dressed in period costume  and a brass band playing .

These two proceed to ride the bounds of the village stopping at various locations along the way whereupon the accompanying brass band plays or dancers dance before setting off again.

It sounds weird I know but the atmosphere is amazing .

The ceremony by the way is hosted by one of the pubs in the village and this changes every year . The pub that is hosting is usually the one where the ceremony all starts from and were the garland is hoisted up on to the kings head.

After riding the bounds the king rides up to the church whereupon the garland is removed and hoisted up to the top of the church and put on display. Further dancing by children and I suspect drinking by adults takes place along with maypole dancing in the village square.

All in all a good day out .